Jean-Baptiste Gaasch used an advance on his inheritance to start trading bottles in 1906 in Antwerp for the beer and mineral water industries. At the beginning, the deliveries of bottles were done by carts drawn by horses.

His customers asked him for help in the supply of gas. What pushed him to also start a production of industrial gases under the name of "La Carbonique Belge (LCB)". 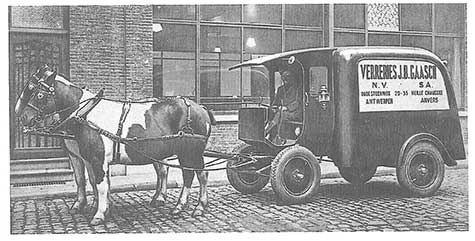 His son and his son-in-law succeeded him, increased the activity and thereby enabled the company to survive the difficult periods of the great crisis and the world war. After the bankruptcy of one of their customers, they had the opportunity to buy a company producing plastic caps, that later became "Resibel", known today as the "United Caps" group.

Two of their own sons took over the reins of the company in the 1960s. They developed the company through partnerships with foreign suppliers and the internationalization of sales. They set up separate specialized departments in the company, one turning towards the food and beverage markets, the other towards the pharmaceutical, cosmetical and chemical industries.

At the beginning of the 1970s, understanding the transport problems due to their establishments in the cities of Antwerp and Brussels, they decided to move towards a single building located outside of the city center and at the crossing of the main Belgian highways. It is the present location of the offices in Mollem.

At the end of the 1990s, two of their own children joined them. They are the present directors of the company. They brought the logistics up to date, set up a quality system, modernized the information systems and professionalized the management systems. The new generation brought the control 100% back inside the family.

With a dynamic and motivated team, our more than centenary company is ready to face the challenges of the 21st century.